The city of Vancouver is a coastal seaport city in western Canada province of British Columbia. The Vancouver FSA Map templates in PowerPoint format include 2 slides, including the framed and standalone Vancouver FSA map.

According to the definition of Canada Post Corporation, A forward sortation area (FSA) is a way to designate a geographical unit based on the first three characters in a Canadian postal code. All postal codes that start with the same three characters—for example, K1A—are together considered an FSA.

You will find the shapes or texts are grouped by the city and surrounding FSAs to facilitate your editing work. You can also enjoy other Vancouver Map with 22 local areas and 142 voting divisions, location within the British Columbia province and Greater Vancouver region.

For more detailed information, please check it in Wikipedia. 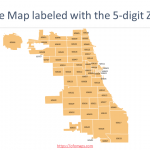