The Queensland state is the third populated one of Australia, with 5.36 million residents as of June 2020. About 45% of the state’s population lives in Greater Brisbane. Queensland is located the wettest and most tropical part of the continent that is bordered by New South Wale to the south, South Australia to the southwest, and Northern Territory to the west. The administrative structure of Australia is composed of 8 States and territories, which are New South Wales, Victoria, Queensland, South Australia, Western Australia, Tasmania, Northern Territory, and Australian Capital Territory. You can check the Australia Map with States Bundle.

In a word, you can change the texts, colors, sizes, and add your charts. Most important of all, our maps can help to reduce your efforts and create good-looking maps. So you can focus on your core competence and outsource the maps to our professionals. At the same time you can also refer to the detailed LGAs of Queensland state in Wikipedia. 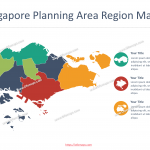