Deir-ez-Zor has 3 districts, with each district as an individual shape. They are Abu Kamal, Al Mayadin, and Deir-ez-Zor districts. 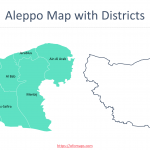